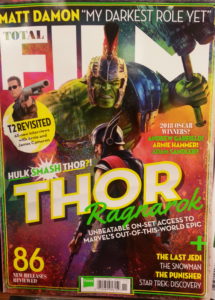 One thought on “A review of Marvel’s Thor: Ragnarok”