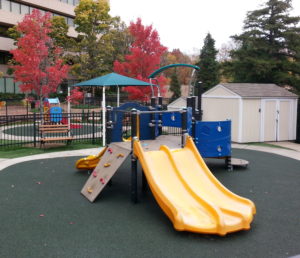 The following piece was my second piece published on the Examiner back in November of 2012.  It was based upon an actual conversation between me and my father during my youth growing up on the Buffalo’s east side.  Early on I developed misconceptions and stereotypes about peers from various ethnic groups and what they were and were not good at – Asians in particular.

My father challenged those stereotypes which is something that empowered me later on in life and helped change my academic paradigm and world view.  The visual for this piece is a playground for young children, because at a young age before we get socialized and develop racial biases and ideas, we all start off with the same potential to learn and achieve.  It’s what happens to us as we grow up in our unique environments that determine how our lives turn out, our successes, our achievements, and our failures.

He was an average student from the inner city.  Like many young people, his views of the world were shaped by what he saw in his community, his peers, the media and ignorance.  His older brother and his best friend, both of whom he spent most of his time with, were not honor roll students either.

The father challenged his son’s statement saying, “They’re not necessarily smarter than you; they just spend more time in their books than you do consistently after school every week.”

“A study showed that Asian students study an average of 12 hours a week or more after school.  For Caucasian students the number is six hours, and for African American and Latino students the number is four hours,” the father said citing a study he had read.  The study suggested that academic performance was a function of time invested, not the intelligence of one race over another.

The conversation changed the son’s educational paradigms allowing him to become an honor roll student himself later on.  This true story demonstrates the importance of both parenting and mentoring.  With limited experience and wisdom, young people don’t always understand the world around them and can make conclusions that aren’t accurate.

In The 7 Habits of Highly Effective People the late Stephen Covey describes paradigms as mental road maps that guide our behaviors.  These paradigms direct us and tell us how to react in certain situations.  Paradigms largely influence perceptions of academic achievement.

Dr. Ralph G. Perrino, of the Northern Virginia Tutoring Service, describes in The Socialization Process and Its Impact on Children and Learning, that a student’s academic performance is influenced by family, school, peers, mass media, public opinion, work, volunteer groups and religion/spirituality.  In summary, the expectations and culture students are exposed to, affects their performance.

The counties in northern Virginia, for example, are inhabited by families with highly educated parents.  “These parents are willing to invest their financial resources to make sure their children do well and go to college,” said Dr. Perrino.  The 90% college matriculation rate in these counties is thus a function of values and resources, and not necessarily an innate superior ability over other students such as those within the neighboring District of Columbia.

In Savage Inequalities, Jonathan Kozol argues that the quality of education available in any community is strongly affected by economics and politics.  These two factors directly impact not only educational and neighborhood environments, but also the culture, expectations and long term goals of the parents and children within communities.

Circling back to the opening of this article, at the University of Michigan and similar research institutions, a trend started in the early 21st Century.  Many of the research labs, particularly in the biomedical sciences, were employing large populations of Asian scientists.

It wasn’t magic though.  A professor noted that these scientists were “extremely hardworking, dedicated, and not concerned with things that their American counterparts are preoccupied with things such as having social lives and lots of leisure time.”

“Not everyone in China is smart.  Similar to America, there are a lot of people who aren’t smart and successful,” said Dr. Cheng Fang, a talented scientist from China, discussing the stereotypes about his people and his country.  Simply put, some of China’s most motivated and successful families come to the United States seeking the opportunities for advancement that this country has to offer, many in the sciences, and those are the ones that are seen most often.

Interestingly, Cheng further revealed that there are no second chances in China academically.  In the Asian countries if you don’t excel early in school, numerous doors and opportunities permanently slam shut.  In the United States you can under achieve in the lower grade levels and still positively make something of yourself through higher education or other avenues such as the military, entrepreneurship or entertainment.

Thank you for taking the time to read this blog post. If you enjoyed this post, you may also enjoy:

• The benefits and challenges of using articulate speech
• Challenging misconceptions and stereotypes in class, household income, wealth and privilege
• Your net worth, your gross salary and what they mean
• We should’ve bought Facebook and Bitcoin stock: An investing story
• Who will benefit from Apple’s $350 billion investment?

If you’ve found value here and think it would benefit others, please share it and/or leave a comment. To receive all of the most up to date content from the Big Words Blog Site, subscribe using the subscription box in the right hand column in this post and throughout the site, or add the link to my RSS feed to your feedreader. You can follow me on the Big Words Blog Site Facebook page, and Twitter at @BWArePowerful. Lastly, you can follow me on Instagram at @anwaryusef76. While my main areas of focus are Education, STEM and Financial Literacy, there are other blogs/sites I endorse which can be found on that particular page of my site.