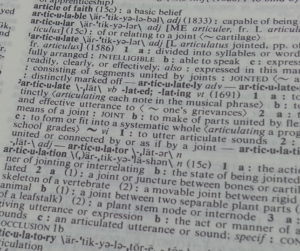 The following article was my inaugural submission for the Examiner back in November of 2012, and it’s very appropriate for my inaugural post on the Big Words Blog Site.  It hit upon one of the main themes of this site; the use of articulate speech.  One of the major rules for contributing to the Examiner was not writing in the first person point of view, something the publication policed very closely.  Hence in the piece, I’m not referring to myself directly.

“Why do you use those big words all of the time?” a middle school student was asked by his classmates in the late 1980s. It was a diverse school, but these particular students were from Buffalo’s East side which, for the most part, consisted of African American families.

Articulate speech, and big words were normal in his home. Both of his parents were college educated. His mother encouraged learning professional skills such as using proper typing techniques, though the importance of such skills were not well understood at the time by her sons. There were also plenty of books to read in the house. Public speaking was also encouraged at Sunday School every week at church.

Using big words helped him to earn his Ph.D. from a world renowned university. They allowed him to make very technical presentations, publish research articles, and to present himself well on job interviews.

As a scientist within the federal government, he made decisions that affected the health of the entire United States population. Articulate speech, the use of big words, and proper grammar were a part of his job performance; whether it was setting new policies, preparing documents, making presentations, and even collaborating with colleagues in foreign nations.

Ultimately being a major part of his success, his articulate speech caused difficulties throughout his life, particularly as a youth where it made him stand out from his peers, causing him to be perceived as different. He later found that being different was actually okay. As an adult, people continued to form opinions about him, positive or negative, based upon the way that he spoke. Nevertheless, his articulate speech ultimately opened several doors for him as he grew older.

The United States faces several challenges in the 21st century, one being the competition with other countries in the STEM fields (Science, Technology, Engineering and Mathematics). A strong command of the English language is key for success in these fields. Asia’s brightest scientists, for example, spend considerable time and energy learning the English language in order to establish their careers in the United States.

Speaking and writing often go hand in hand. In his book, Inside American Education, Thomas Sowell writes that the educational system in the United States needs to get back to the basics of teaching children how to read, write and how to do mathematics. The late Dr. Joseph Fail, Jr., of Johnson C. Smith University, published numerous articles encouraging students to be able to write effectively, particularly students of color.

In some communities speaking articulately is viewed as speaking proper or “white”. It also represents not having “street credibility”, which can be very important at an early age and even in adulthood, depending upon the social circle. This can be devastating for young people, ultimately locking them out of opportunities later in life.

In the Rich Dad Poor Dad series by Robert Kiyosaki, several compelling arguments are made for expanding one’s vocabulary, and ultimately speaking correctly. Even though financial literacy is the focus of the book, the importance of words is discussed as well. Robert eloquently describes words as important tools that unlock doors to life’s multiple possibilities.

Young people (and adults) need encouragement to the extent that a large vocabulary and articulate speech are valuable assets. They need affirmations that it is okay to read books and to speak well, even though it may make them feel different than their peers. They need confirmation that having a strong command of the English language is important in that it creates opportunities, opens doors, and builds bridges no matter what the professional field or discipline.

Thank you for taking time to read this blog post. If you enjoyed this post, you may also enjoy:

• Challenging stereotypes and misconceptions in academic achievement
• Challenging misconceptions and stereotypes in class, household income, wealth and privilege
• Your net worth, your gross salary and what they mean
• We should’ve bought Facebook and Bitcoin stock: An investing story
• Who will benefit from Apple’s $350 billion investment?

If you’ve found value here and think it would benefit others, please share it and/or leave a comment. To receive all of the most up to date content from the Big Words Blog Site, subscribe using the subscription box in the right hand column in this post and throughout the site or add the link to my RSS feed to your feedreader. Please visit my YouTube channel entitled, Big Discussions76. You can follow me on the Big Words Blog Site Facebook page, and Twitter at @BWArePowerful. Lastly, you can follow me on Instagram at @anwaryusef76. While my main areas of focus are Education, STEM and Financial Literacy, there are other blogs/sites I endorse which can be found on that particular page of my site.

4 thoughts on “The benefits and challenges of using articulate speech”