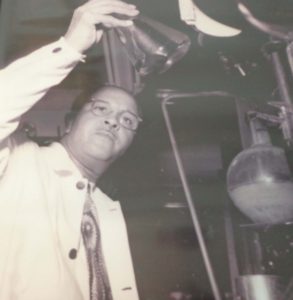 I originally published this piece on Percy Julian in February of 2015 when still writing for the Examiner.  He is someone I would also consider a “Hidden Figure” at least in my life.  Attaining a Ph.D. in the sciences myself, I didn’t learn about Julian until well into my science career.

When I watched the documentary Forgotten Genius, I was amazed not only about what Julian had to overcome, but also everything he accomplished scientifically, and how the very same scientific process I experienced as graduate student was similar to his.  Dr. Vernon Morris of Howard University’s Department of Chemistry and NOAA Center for Atmospheric Sciences (NCAS), later shared with me that watching Forgotten Genius is in fact required for Howard’s Chemistry students, and rightfully so.

My last black history month reflection for 2015 will focus on the legendary Chemist Percy Julian.  Though honored with his own postal stamp in 1993, the name Percy Julian didn’t register in my mind until the annual conference for the National Organization for Black Chemists and Chemical Engineers (NOBCChE) in 2012.  Someone won an award named after him that night, but not being a Chemist myself, I didn’t have a feel for why he was held in such honor in that particular circle.  It turned out that there was an entire pantheon of well-accomplished African American Chemists.

Later on, a mentor gave me a copy of Percy Julian; Forgotten Genius.  The DVD chronicled Julian’s life from his youth in the Jim Crow south, to his collegiate studies at Depauw University, to his doctoral studies abroad in Austria, and then through to his vast research career in the chemical industry which almost didn’t happen due to racism.  What stood out to me from Percy Julian’s story was his perseverance in spite of the racism he encountered, as well as the fact that his original scientific interest was in plants which he later returned to, after receiving his chemistry training.

Why is Percy Julian important and what did he do in the field of chemistry?  A better question would be what didn’t he do in chemistry?  Among his many accomplishments were:

In addition to his many scientific achievements and victories in the realm of chemistry, Percy Julian became highly involved in the Civil Rights movement and with the NAACP.  In the latter stages of his life, he was celebrated with more than 18 honorary degrees and more than a dozen civic and scientific awards.  He became only the second African American to be elected to the National Academy of Sciences in 1973.

Julian’s story is important for several reasons.  First it shows what can be accomplished with great perseverance.  Second it is a testament to how much talent was and is wasted in urban communities due.  Julian’s story is very important for African Americans pursuing advanced degrees particularly in the sciences.  When watching Forgotten Genius, much of what Julian went through during graduate school reminded me of my own experience.  Seeing his story years ago would’ve helped me better understand the significance of my own graduate studies.  Today his story can help inspire younger generations of potential African American scientists, and innovators in a world where STEM (science, technology, engineering and mathematics) education is becoming increasingly important.

Thank you for taking the time out to read this blog post. If you’ve found value here and think it would benefit others, please share it and or leave a comment. I’ve recently started a YouTube channel, so please visit me at Big Discussions76. To receive all of the most up to date content from the Big Words Blog Site, subscribe using the subscription box in the right hand column in this post and throughout the site, or add the link to my RSS feed to you feedreader. Lastly follow me at the Big Words Blog Site Facebook page, on Twitter at @BWArePowerful, and on Instagram at @anwaryusef76. While my main areas of focus are Education, STEM and Financial Literacy, there are other blogs/sites I endorse which can be found on that particular page of my site.