One of focus of my blog is Current Events. Throughout the history of the United States, there have always been racial tensions and discrimination, sometimes resulting in “Hate Crimes”. Hate Crimes are concern even in 2018. The following contributed post is thus entitled; Political Correctedness Can’t Explain Increasing Hate Crimes Away.

Hate crime is a word we’ve heard a lot in recent years. While it looked like racial discrimination was at an end with our first black president, things couldn’t have changed more since Trump took the helm. Now, we’re seeing new racial slurs and undeniable hate crimes on a daily basis. It’s shocking, and many would argue that it’s a step backwards.

Of course, the news on this issue can be a little misleading. For one, it’s worth noting that crimes like these started a steady increase while Obama was in the White House. That amount has risen much faster under Trump, but this is by no means a new issue. The only real difference is that many of us are now becoming aware of the problem.

It’s also worth noting that hate crime still accounts for a relatively small portion of crimes across the country. In California, for instance, last year saw a total of 1,093. That may not seem like such a bad number until you consider that’s up 44% since 2014. Figures from across the country paint a similar picture in every major city.

Reasons for this rise seem to vary. A change in general outlook has contributed to more obviously hate-based crimes. Equally, an increase in minority groups seems to have played its part in these outbursts. Whatever the reason, though, this is not, as some believe, a case of ‘political correctness gone mad.’ 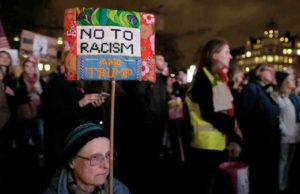 This is a statement we often hear, and it’s a worrying one. While there are those out there who want to address issues like these accordingly, others are more willing to turn a blind eye. In a way that’s understanding. The thought such violent crimes could be perpetrated from racial differences alone is shocking. But, denying the severity of crimes like these is a harmful approach.

To prove that this increase is nothing to do with sensitive political correctness, consider the definition of a hate crime. According to USA Today, ‘Hate crimes are considered criminal acts motivated by prejudice based on race, religion, national origin, sexual orientation, gender identity and disability.’ As you can see, definitions like these don’t leave much room for doubt.

Consider, too, that evidence needed to gain a conviction here also leaves little wiggle room. A defense attorney for someone facing charges here will fight against any judge who cannot prove, beyond reasonable doubt, that discrimination was behind a crime. If you want to know more about that, you can read about it here or do your own research on the subject. Either way, anyone would have a hard time arguing the increase here is just political correctness with that in mind.

As tempting as it is to deny the severity of cases like these, doing so contributes to the issue. Instead, we should be working to raise awareness of this growing problem, and ensuring those responsible gain the punishment they deserve. How else can we ensure that every U.S. citizen feels safe on these streets once more?