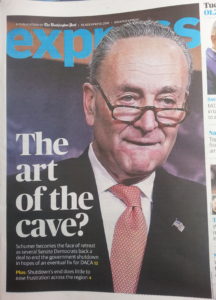 “For those of us who are in the military, contractors and government employees living paycheck to paycheck yet who are still Democrats, to be honest, we NEEDED them to cave. Republicans don’t want the big gov’t anyway. They don’t care if it fails. We need our jobs.”

The following piece was originally published on the Examiner back in October of 2013 during my very first government shutdown early in my federal career. Five years later after our most recent three-day government shutdown, and with another one potentially on the way, I thought it would be appropriate to republish this. The opening quote is from a thread on Twitter. Someone took a verbal shot at Senator Chuck Schumer for caving in and ending the shutdown after only three days, and a federal employee responded saying that she needed Schumer and the Democrats to surrender. The reality is that regardless of one’s position on something like the Deferred Action on Childhood Arrivals policy (DACA), there are many, many government employees who have bills to pay and can’t afford the uncertainty of having a prolonged break in their income. When government shutdowns occur, we see that there are instances when federal careers are not as stable as we believe them to be.

Recently many of my articles have focused on financial literacy. One of the key components of financial literacy is the knowledge of how to generate income whether it be through working a job, entrepreneurship, or wise investment of money already earned. With the government shutdown taking place, quite a few federal employees have been forced to ponder one of the key considerations of working a job; security.

“When we were in college, the government was thought to be the place to be in terms of employment. A lot of people wanted to get in,” a close friend who is also a federal employee and a mother of two with a third on the way said when recently over lunch. “Now things are really different and there is so much uncertainty. People are rethinking whether or not they want to go in or even stay in the government.”

In a booming economy with plentiful tax revenues, a robust Gross Domestic Product (GDP), and when our elected officials are getting along, yes being a federal employee can be a good way to go, so much so that some would say that government employees are treated too well. Prior to 2008, it was thought to be stable employment and federal employees were thought to be relatively safe from the ups and downs of our nation’s economy. On a side note, it has also been said that it’s hard to fire federal employees, and that there are some in our ranks who have lost their desire to produce and are getting paid to do nothing. In that regard maybe some federal employees are treated too well.

When the country is in a recession and our elected officials can’t agree on how to best fund the government, or even to fund it at all, being a federal employee can look a lot less attractive. It is then that you (as have many) realize that you are still at the mercy of someone else; in this case our politicians who interestingly continue to get paid no matter what.
My tenure as a federal employee started in 2008 at the end of George W. Bush’s second term just as the current economic downturn ramped up (the Great Recession).

Though having a steady income while other sectors of the economy were disintegrating around us, federal employees have experienced/ endured:

This series of unfortunate events has shown that federal employees are just as vulnerable to the same economic calamities as everyone else when perfect storms like the one that we’re currently in sets in. It has shown that federal employees are at the mercy of quarreling elected officials. These events have in fact shown that whether you’re employed by the private sector, the government, or an entrepreneur, everyone is vulnerable to something. Lastly though it hasn’t taken place during my tenure, there is also something call a Reduction in Force (RIF) in the government where the size of the workforce needs to be reduced, and federal employees are retained or let go based upon seniority and experience.

No matter what sector of employment or business you’re in, it is once again important to not live ‘paycheck to paycheck’ if you can help it, and to have some money saved up for unforeseen hardships such as this 2013 government shutdown. In his Financial Peace University course, Dave Ramsey calls that having an ‘Emergency Fund‘, or a ‘GOK’ (God Only Knows) fund.

• Who will benefit from Apple’s $350 billion investment?
• Challenge stereotypes and misconceptions on household income and wealth building
• We should’ve bought Facebook and Bitcoin stock: An investing story
• Mother’s Day 2017: one of my mother’s greatest gifts, getting engaged, and avoiding my own personal fiscal cliff
• Your net worth, your gross salary and what they mean
• The difference between being cheap and frugal

If you’ve found value here and think it would benefit others, please share it and or leave a comment. To receive all of the most up to date content from the Big Words Blog Site, subscribe using the subscription box in the right hand column in this post and throughout the site, or add the link to my RSS feed to your feedreader. Lastly follow me on the Big Words Blog Site Facebook page, on Twitter at @BWArePowerful, and on Instagram at @anwaryusef76. While my main areas of focus are Education, STEM and Financial Literacy, there are other blogs/sites I endorse which can be found on that particular page of my site.