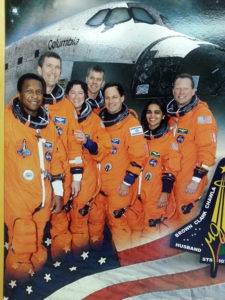 While there are actually quite a few black astronauts, two names that immediately come to my mind are Mae Jemison and Ronald E. McNair. The TRIO program which led me to my graduate research was actually named after Ronald E. McNair who died during the tragic launch of the Space Shuttle Challenger STS-51-L.

Since volunteering at the David M. Brown Arlington Planetarium, I’ve become aware another black astronaut; Colonel Michael P. Anderson. Michael P. Anderson was a member of the crew of the Space Shuttle Columbia STS-107 which disintegrated upon re-entry into the earth’s atmosphere on February 1, 2003. Anderson served as the ‘Payload Commander’ and the ‘Lieutenant Colonel’ in charge of science experiments on the Columbia.

A biography of astronaut Michael P. Anderson is readily available on line, but just briefly, he was born into a military family in Plattsburgh, NY but grew up in Spokane, Washington. He earned his Bachelor of science degree in physics and astronomy from the University of Washington in Seattle in 1981, and in 1990 he was awarded his Master of science degree in physics from Creighton University. Colonel Anderson entered NASA by way of the United States Airforce where he was selected for astronaut training being one of the 19 candidates selected from 2,962 total applicants. Prior to the STS-107 mission, Anderson participated in the STS-89 Endeavour mission.

The Space Shuttle Columbia STS-107 disaster occurred due to critical damage to the shuttle’s ‘orbiter’ when foam from the fuel tank’s insulation fell off and tore a hole in Columbia’s left wing. During re-entry, the hole allowed super-hot atmospheric gases to penetrate the orbiter’s wing, leading to its destruction. The other astronauts in the crew included:

The picture of the Space Shuttle Columbia STS-107 and its crew used in this post was provided by David M. Brown Arlington Planetarium.

Thank you for taking the time out to read this blog post. If you’ve found value here and think it would benefit others, please share it and or leave a comment. I’ve started a YouTube channel entitled, “Big Discussions76“.  Please visit it and subscribe.  To receive all of the most up to date content from the Big Words Blog Site, subscribe using the subscription box in the right hand column in this post and throughout the site, or add the link to my RSS feed to your feedreader. Lastly follow me at the Big Words Blog Site Facebook page, on Twitter at @BWArePowerful, and on Instagram at @anwaryusef76. While my main areas of focus are Education, STEM and Financial Literacy, there are other blogs/sites I endorse which can be found on that particular page of my site.