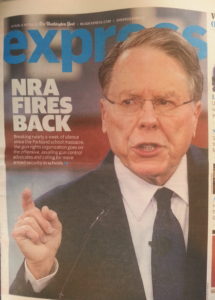 I originally published this article on the Examiner back in 2012 shortly after the Sandy Hook shooting in Newtown, Conn. While much of the debate afterwards focused on the National Rifle Association (NRA) and banning firearms, someone suggested making schools safer – an approach I was in favor of even if American’s 2nd Amendment rights were taken away. After all, can the bad guys be legally prevented from getting their hands on firearms?

Recently after this most recent mass school shooting in Florida, the same debate has arisen. President Donald J. Trump set off a fire storm when he suggested arming teachers, and the NRA’s CEO Wayne LaPierre followed up stating that a more sound approach would be greater armed security at schools. Six years later, mental health is working its way into the discussion, but we’re essentially still having the same debate. As with many of my blog posts, the pictures used are courtesy of the Washington Post’s Morning Express.

In the previous three articles, factors that specifically affected learning were addressed; attitudes, socioeconomics, and environment. In light of the shooting at Sandy Hook Elementary School in Newtown, Conn. on December 21, 2012, this article will focus on thinking about how to create safer schools, and preventing similar tragedies. Admittedly, this is a very complex issue with no simple solution. The intent of this article is to add to a discussion which will likely continue for a very long time.

The majority of discussions in the media have focused strictly on the 2nd Amendment (the right to bear arms), and gun control. Discussions about making schools themselves more secure have been the minority. Predictably discussions in the social media world erupted in addition to the mainstream media demonizing the NRA and calling for stricter gun control measures. One of many threads on Facebook generated a debate of up to 80 comments about gun control.

On CSPAN the morning of December 18, 2012, a caller recommended to journalist John Fund and the host that a way to make schools more secure would be to set up perimeters and having metal detectors in most schools. Mr. Fund replied that it would be, “too costly and difficult to implement.” Even if that is true, isn’t protecting the lives of innocent children and faculty members worth the cost? 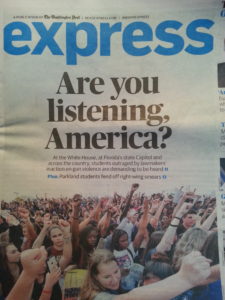 Whether it’s a shooting at a school, a Jewish temple, or in a movie theater, control of guns is clearly a daunting task. While the majority of gun owners are responsible, legislators on Capitol Hill cannot predict when an Adam Lanza, or some other assailant will go on a random or premeditated killing spree. While movie theaters, shopping centers and places of worship are difficult to protect, carefully policing who and what enters an elementary or high school should not be.

Whenever these shootings occur, innocence is further stripped away from everyone, especially from school environments. Our world is not the safe and secure place that it once was even in seemingly secluded suburban areas. Suburban schools may now need to be secured similar to their urban counterparts, and unless appropriate measures are taken, we may continue to see tragedies such as that in Newtown, Conn.

Following the September 11, 2001 terrorist attacks, air travel was forever changed. Because of those events, no one will ever again be able to fly commercially without having to go through stringent security measures. Millions of people fly every day, and it is now considered normal. Similarly, most state and federal government buildings require walking through metal detectors prior to entry for visitors. Isn’t it time to find a similar solution to keep our schools safe?

Thank you for taking the time out to read this blog post. If you’ve found value here and think it would benefit others, please share it and or leave a comment. To receive all of the most up to date content from the Big Words Blog Site, subscribe using the subscription box in the right hand column in this post and throughout the site. Lastly follow me at the Big Words Blog Site Facebook page, on Twitter at @BWArePowerful, and on Instagram at @anwaryusef76. While my main areas of focus are Education, STEM and Financial Literacy, there are other blogs/sites I endorse which can be found on that particular page of my site.