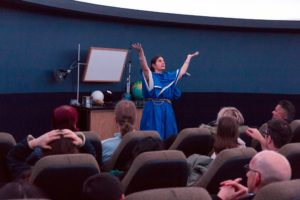 From the Dec. 9-11, the Friends of the David M. Brown Arlington Planetarium hosted their final weekend of 2016 titled, “Science and the Christmas Star.” Each day of the weekend there were showings of the show titled: An Astronomer Looks for the Christmas Star.  The program was created in house by the Friends, and focuses on the phenomenon of the Christmas Star which according to biblical texts led the three Wise Men to the baby Jesus Christ in the manger.

Friday Dec. 9 was member appreciation night where all members were admitted for free.  There were standard showings of the program on Dec. 10 and 11.  Following each showing, Friends’ board of director, astronomer Jennifer Bartlett, Ph.D. portrayed Hypatia of Alexandria.  Her portrayal featured of a monologue where she argued for an alternative explanation for the Christmas Star.  Following Michael Molnar’s, The Star of Bethlehem, she argued that the “star” was a powerful horoscope including the lunar occultation of Jupiter in Ares at dawn on April 17, 6 BC.

“The mystery of the Christmas Star has been a mainstay of Planetariums for years during the Christmas Season,” said Friend of the Arlington Planetarium, co-creator and co-narrator of the program, Dr. Alice Monet.  The program itself discussed the potential explanations for the Christmas Star; a planetary conjunction, a comet, a supernova, or what is more believed in nonscientific circles, a Miracle.

The Friends will host special events at the David M. Brown Arlington Planetarium one weekend every month until the end of the school year. Each weekend will be geared towards increasing STEM education/awareness for all ages and will feature a specific theme.  For more information, visit the Friends’ website.  The theme of January’s weekend will be: Citizen Science & Astronomy.