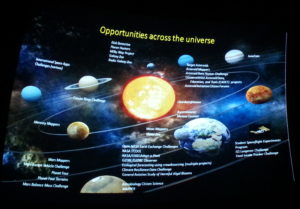 From the Jan. 27-29, the Friends of the David M. Brown Arlington Planetarium hosted their first weekend of 2017 titled “Citizen Science and Astronomy”.  The weekend was inspired by NASA’s current efforts to incorporate the astronomy work of citizen’s into its own research.  On Friday Jan. 27 there was a viewing of the full dome show “Undiscovered Worlds” following the Friends’ annual meeting.  On Saturday Jan. 28 there was a viewing of the full dome show “Oasis in Space”, which was followed by a talk titled “The NASA Solve Program” by Dr. Amy Kaminski.  Dr. Kaminski’s talk was followed a showing of “Journey to the Center of the Milky Way” by the European Southern Observatory.  On Sunday Jan. 29 there was a second talk titled “How You Can Get Involved in Citizen Science” by Dr. Jessica Rosenberg (National Science Foundation and George Mason University), followed by a showing of the “Magic Treehouse”.

“The thing I’ve become really passionate about is this idea at NASA of how we can connect, share and involve people in the work we do in aeronautics and space exploration,” said Dr. Amy Kaminski.  “How do we bring that to the American and global public?

“NASA has a fabulous public affairs office, and great education programs where we’re continually informing people about the latest and greatest coming out of NASA – when we are launching – where we are landing.  We have internships for students of all ages but the thing I’ve gotten particularly excited about is the idea of citizen science, and how we make people active contributors to the program.  Then it’s not just about education, but it’s also about making science more accessible to people – making everyone a participant in the space program, because after all it is the nation’s space program.”

Dr. Kaminski’s talk started off highlighting how science first became its own career path in the nineteenth century and how in the early twentieth century it involved encouraging citizen involvement.  She then discussed the NASA Solve program which provides numerous opportunities for citizens to get involved.  She further highlighted NASA’s three motivations for encouraging citizen involvement before going into detail about the individual projects within NASA Solve:

·         An abundance of data and the ability of humans to interpret data in ways that computers can’t and;

·         A recognition that great ideas can come from anywhere, including out of aerospace disciplines; and

·         The world is now highly connected and interfaced in terms of the internet and the ability to share data.

“NASA Solve is like a marketplace,” Dr. Kaminski said describing the program’s website and the multitude of available projects with the potential for citizen involvement.  Some of the exciting projects within NASA Solve include: Globe Observer, Aurorasaurus, and Disk Detective.  To learn more about NASA Solve and to become involved the opportunities available there, visit:   https://www.nasa.gov/solve/index.html.

The Friends will host special events at the David M. Brown Arlington Planetarium one weekend every month until the end of the school year. Each weekend will be geared towards increasing STEM education/awareness for all ages and will feature a specific theme.  For more information, visit the Friends’ website: http://friendsoftheplanetarium.org.  The theme of February’s weekend will be: Endless Forms Most Beautiful: Exploring Evolution & Celebrating Darwin Day.

If you liked this article, please do share it, and leave comments.