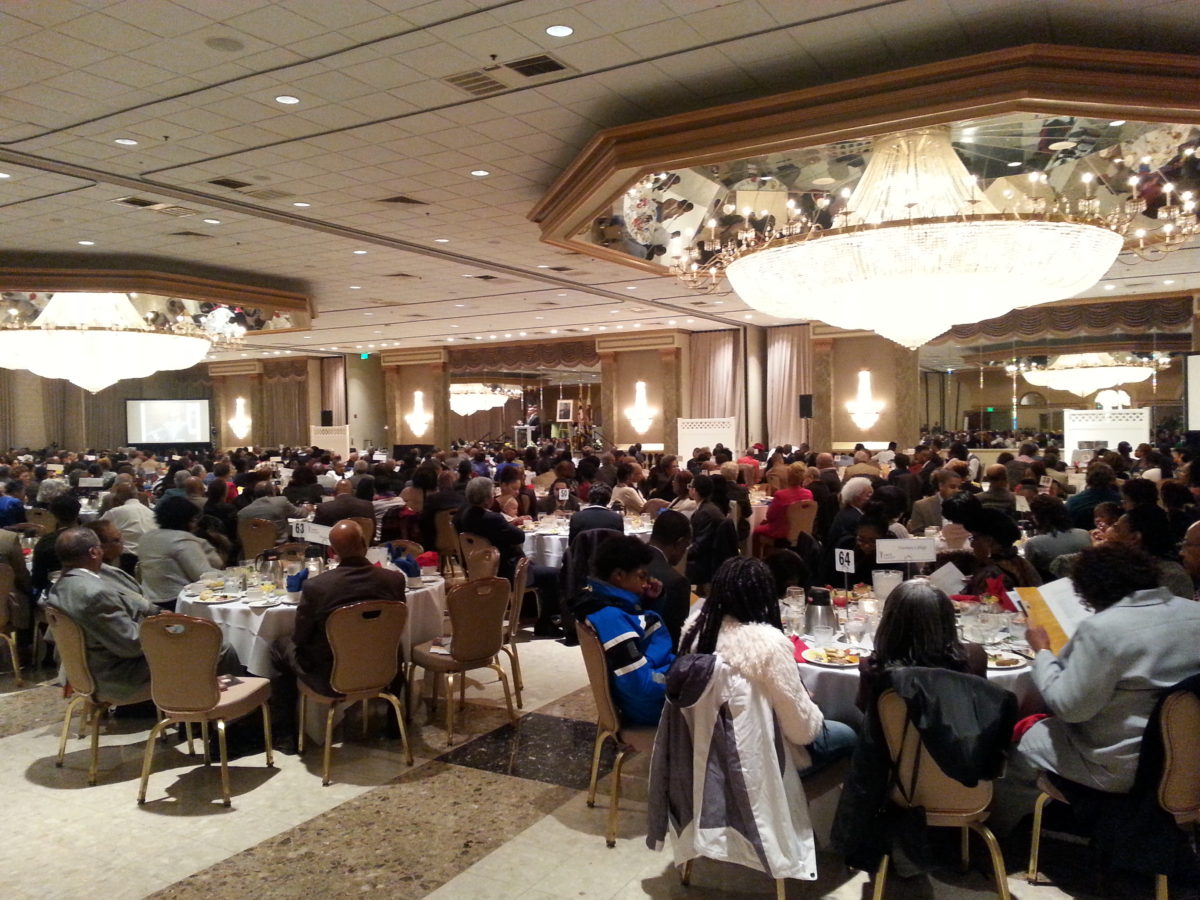 On Monday Jan. 16, the Washington Inter-Alumni Council of the United Negro College Fund (WIAC-UNCF) hosted its 34th Annual Dr. Martin Luther King, Jr. Birthday Breakfast celebration in Greenbelt, Md.  The annual breakfast which attracts anywhere from 600 to 800 people, was started in 1980 and was originally the idea of then WIAC President and Paine alumnus Fred Thompson.  In addition to keeping with UNCF’s mission of raising scholarship funds for students, the event recognized two individuals for their community service contributions, and featured a notable keynote speaker.

The mistress of ceremony for the breakfast was Nikki Strong of WHUR who led a full program which opened with the singing of, “Lift Every Voice and Sing”, by all in attendance.  The historic Negro Anthem was followed by a series of speakers and musical selections such as that performed by guest gospel performer Capria McClearn.   The morning culminated with the recognition of this year’s award recipients and keynote speaker.  This year’s “Person of the Year” award recipient was Phil Freelon, founder and president of the Freelon Group which designed and constructed the Smithsonian’s new National Museum of African American History and Culture.  This year’s Grace Walker Phillips Youth Leadership Award recipient was Eunique Jones Gibson, a DC native and founder of the “Because of them, We Can” campaign.

“Anytime history seizes you, it has to be a calling.  It has to be something that has chosen you.  The bible calls that a, ‘Cross to bear,’” said Reverend Dr. Grainger Browning as he discussed Dr. Martin Luther King Jr.’s realization and acceptance of his mission.  “No one picks up a cross to bear. You don’t choose a cross – a cross chooses you.”

This year’s Keynote Speaker was the Reverend Dr. Grainger Browning, Jr. of the Ebenezer African Methodist Episcopal Church in Fort Washington, Md.  The theme of his talk was, “Hidden Figures who held onto the Dream,” where he outlined prominent African American historical figures who did great things and persevered leading up to and beyond Dr. Martin Luther King, Jr.’s famous dream.

“We provide over $100 million annually in scholarship assistance to students who attend UNCF member institutions, other Historically Black Colleges and Universities (HBCUs) and over 1100 other colleges and universities,” said Charles Thompson III, UNCF’s Area Development Director for Maryland, Washington, DC and Northern Virginia.  “There are two areas we consider, how well the student meets the criteria set by the donor for each scholarship but also demonstrated financial need.  Many of the students we help come from families whose income is below $25,000.”

The MLK breakfast was sponsored by: the Prince George’s Chamber of Commerce, Prince George’s Community College, Southern Management Corporation, Wegmans, and Morgan Stanley.  Visit www.uncf.org/dmv to learn more about the organization and to make a donation.